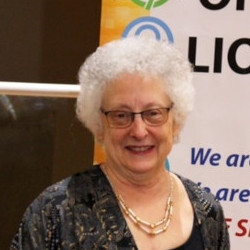 Lion Mary is a 21-year Lions Club member joining in December 2000. She was a member of East Knox Lions from 2000 until July 2005; transferring to the Mount Vernon Lions in July 2005. Maintaining her membership there until July 2017, returning to the East Knox Lions. Mary has had perfect attendance every year except one.

Club positions she has held are President, Secretary, Treasurer, Membership Chair, and Director. Lion Mary sponsored a total of 4 new members into both clubs. She has received Lion of the year twice. On the District level, Lion Mary has been Region 1 Poinsettia Chairperson and served as Assistant Zone 1 Chairperson 2 years, and 6 years as Zone 1 Chairperson, a Certified Guiding Lion, and helped start the Vision Screening program in the district. She is currently the Central Ohio Lions Eye Bank Trustee for Zone 1; serving for 5 years including one
year as Chairperson.

Outside of Lions, Mary is a 11-year member of Eastern Star. Her family attends Saint Paul’s Episcopal Church of which she has been a member for 30 years. During that time, she held the position of church Secretary for 7 years. In her spare time, she likes to travel with her husband and their family dog. They have enjoyed visiting many of the states throughout the U.S.

Lion Mary and husband Tom recently celebrated 47 years of marriage. They reside in Mount Vernon with their dog, Lilly. Their son David, his wife Lindsay, and grandson, Harlan live in Reynoldsburg.