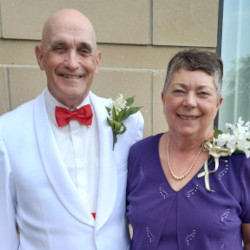 Earl’s military career involved management of air defense operations on two continents including numerous NATO assignments. He also taught National Defense Policy to senior Air Force Cadets. Now a retired Air Force Officer and former two-term Mayor of Doylestown, Earl has stayed active in his community as well. In his second career as a public servant, Earl served as a Township Trustee, County Senior Planner and Chairman of the County Board of Elections. Earl was Chairman of the Akron Metropolitan Transportation Study (AMATS) and has chaired county and municipal planning commissions. He is the former Chairman of the Board of Habitat for Humanity in Wayne County and was secretary of the board for the Wayne County Chapter of the American Red Cross for seven years.

Earl has been a highly active member of The Doylestown Lions Club for 28 years. He has held most offices, including serving as president for two separate terms. He has also been a Zone Chair and was district newsletter editor for five Governors. He is a Melvin Jones Fellow. Earl was awarded the Lions International President’s Leadership Award at the 2021 Ohio Lions Convention by IVP Doug Alexander. Earl is very involved in Lion’s projects and fundraising events, including personally making thousands of those famous Doylestown Lion’s donuts. He has been the editor of his club’s monthly Lion’s Roar for almost 28 years. For several years, he has taken the responsibility of coordinating speakers for club meetings. He also introduced Doylestown Lions to the Ohio Plan of membership development which brought in 13 new members when he was last President. He is currently Growth Chairman of his club which has gained 21
new members in 13 months. Earl is a recent graduate of Regional Lions Leadership Institute and attended the 2021 USA/Canada Leadership Forum. In the last two years he has been Region 2 and then Region 1 Chairman while serving as 2nd and 1st Vice District Governor.

Earl is involved with many different local organizations. He is President of the Greater Wayne Community Federal Credit Union. He has owned and/or managed several businesses and holds a Master’s Degree in Public Administration with additional post graduate work. He is also a strong supporter of his church including leading 17 mission trips and participating in 51. Earl has been married to Lion Kay for 46 years. Lions Kay and Earl have a daughter, Lara, who is married and lives in Corpus Christi, Texas.