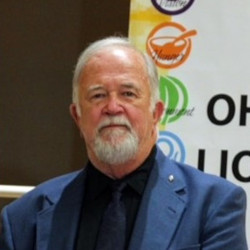 Starting his Lion career in 2008 with the Rushville Union Lions in 13K, District Governor Dave Stockum served Rushville as their secretary, president, and membership chair. Dave served as zone chair in 2013-2015, and was elected second vice district governor of 13K in 2015. During his tenure there, 13K became OH7, and Dave was elected the second governor of the new district in 2017. On the way, he received a Melvin Jones Fellowship, a Dick Bryan Fellowship, Certificates of Appreciation from PIP Jung-Yul Choi and PIP Dr. Jitsuhiro Yamata, a Rushville Lion of the Year Award, a Council Chairman’s Award of Merit, three Council of Governor’s Awards of Merit, and a Presidential Leadership Medal from PIP Chancellor Bob Corlew.

Dave transferred to the McComb Lions Club in 2019 and has served as OH1’s Second and First Vice District Governor. In January of 2022, he was selected as the district’s Acting Governor and began service as the District Governor on July 1, 2022. Since transferring to OH1, he has received a Certificate of Appreciation from IPIP Douglas X. Alexander and a progressive Melvin Jones Fellowship from LCIF. Dave attended all three levels of RLLI, has served on the MD13 GLT and OLF boards, was one of the founding members of the STEPS program, and was chosen as the first Executive Officer of the Ohio Lions Pediatric Cancer Foundation. He currently serves as the Vice President of the Pilot Dogs, Inc. Executive Board.

A graduate of Lorain Brookside High School and Cornell University, DG Dave spent 35 years teaching high school English and coaching football, basketball, softball, tennis and track. He was the 1978 Southeastern Ohio Football Coach of the Year, leading the Little Muskies to an undefeated regular season and final ranking of second in Division II. He was also a Martha Jennings Scholar. He is divorced and has four children in their 30’s and four grandchildren. He maintains a residence in Lancaster, Ohio, to enjoy weekly babysitting help.