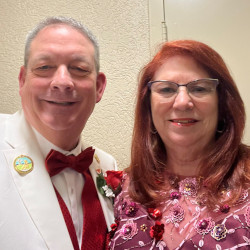 Lion Kevin Reidy started his Lions journey as a member of the Belpre Lions Club (13K, now OH7) in 1992. A member of the Savannah-Crestview Lions (OH2) since 1998, Lion Kevin continues the notion of servant leadership as Council Chair.

At the club level, Lion Kevin has held all offices, except for Tail Twister. As a District leader, he has served as a Zone Chair, Membership Coordinator, Vice District Governor, and District Governor. He is the current MD13 Compliance Committee district representative.

Lion Kevin is a Progressive Melvin Jones Fellow, Dick Bryan Fellow and Richard Neiderhauser Fellow. He has received the Ohio Lions Eye Research Foundation Leadership Award, and Council of Governors’ Award of Merit. In 2021, Lion Kevin received an International President’s Award from IP Jung-Yul Choi. He has twice been a participant in Regional Lions Leadership Training and is a Certified Guiding Lion.

Lion Kevin is a retired educator, having taught social studies and served as a building and school district administrator. He is active in his faith community and serves as an elected district trustee representing member owners in an electric cooperative.

Along with their Golden Retriever, Murphy, the Reidy’s enjoy time with family in Indiana and Illinois and travel to experience the grandeur that is America.