Please be advised that you are in the Ohio Lions Archives.  Content here is historical in nature and some links and references may no longer be valid.  Also, the titles for State and District Officers and other Lions will be for the years they served and saved in the archives. 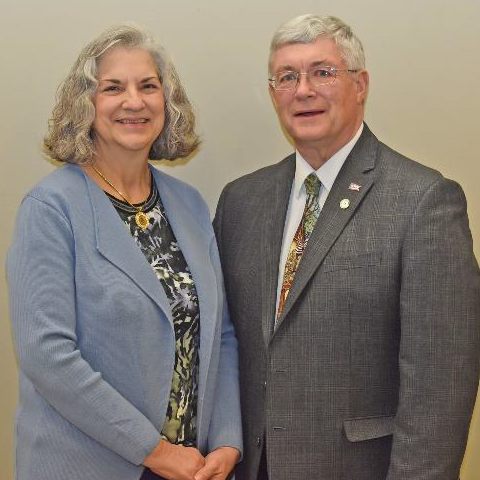 Lions Ron and Kitty reside in Millersport and have been married over 40 years and are the parents of three successful young adults. Oldest son Adam is a farmer and is married to Kristin and they have two daughters, Kenlea and Kaitlyn; daughter Katie is a Corporate Vice President for New York Life and is married to Brent Laugesen and have three sons, Luke, Landon and Grant; and youngest son Jordan serves in the U.S. Navy and is married to Emily and they have a son, Hawkins and a daughter, Henley.

Lion Ron is a cultural arts and events manager for the City of Columbus and Lion Kitty retired as a project manager for State Auto Insurance Company. When not involved in Lions activities, they help their son Adam on their family farm with his beef, grain and hay operations.

Lions Ron and Kitty are both active members of the Millersport Lions Club and the Thurston United Methodist Church.

Lion Ron served twelve years as President of the Walnut Township Board of Education, Past President of the Ohio Festivals & Events Association, Past President of the Volunteer Administrators’ Network of Central Ohio, is a founding member of the Ohio Department of Agriculture’s Amusement Ride Safety Board, served five years on the Central Ohio Lions Eye Bank Operating Board, served six years on the MD-13 Finance & Planning State Committee, served four years as the MD-13 Lions Centennial Celebration Coordinator, served three years as MD-13 Global Service Team Coordinator and was the 2018 USA/Canada Lions Leadership Forum Host Chair.

Lion Kitty has served two years as Cabinet Secretary-Treasurer, four years as the District Newsletter Editor and District Convention Co-Chair twice. She is a Melvin Jones Fellow, Life Member, has served as the club’s President, six years as the club’s Secretary-Treasurer, twenty-five years as Concession Chair for the Sweet Corn Festival and nine years as the Sweet Corn Festival’s Secretary. Lion Kitty has received the International Leadership Medal, MD-13 Council of Governors Award of Merit, Central Ohio Lions Eye Bank Helen Keller Sight Saver Award and has been inducted into the Ohio Festivals & Events Association Legion of Honor. She is the club’s Newsletter Editor, Sight & Hearing Chair, and Webmaster for the Sweet Corn Festival and has been a Lion since 1989. She currently holds the position of Director in her club.