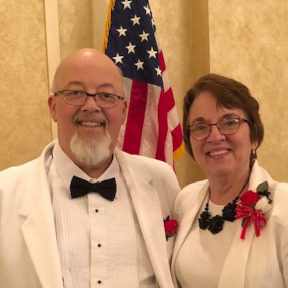 Lion Carol joined the Magnolia Lions in October of 2002, and has previously held all the elected club offi ces except secretary. She is currently the club treasurer and has continued as an advisor for the Sandy Valley Leo Club since starting the club in 2009.

Lion Carol held District offi ce as Zone Chair, Extension Chair, Second and First Vice Governor. She was District Leo Chair from 2012-2019, and in that offi ce, she has led forums at Spring Conferences and District Conventions. She has attended nearly all OH4 (District D) conventions since she became a Lion, plus conventions of other districts, multiple state conventions, one USA-Canada Forum, and two international conventions. She participated in seven winter retreats.

Lion Carol completed all three Levels of the MD13 Regional Lions Leadership Institute, in 2015-2018. She is a Melvin Jones Fellow (2007) and a recipient of a Betty Coffey Fellowship (2009). She received a Knight of the Blind award in 2015. She is a Certifi ed Guiding Lion, completed the Bachelors Degree from Lions University, and received a New Voices Leadership award, all in 2019.

Lion Carol is a graduate of Warren G. Harding High School. She has a Bachelors Degree from Heidelberg College and a Master’s Degree from Ashland University. She is now retired after teaching students for 30+ years, in English, Math, and Special Education.

Lion Carol is married to PDG Jeff Snyder; they have two daughters and four wonderful grandchildren. She enjoys singing and playing music and together with Jeff has often entertained at local community events, church services, and Lions conventions and retreats. She is an active member of Magnolia United Methodist Church, where she sings in the choir, plays bells, leads a women’s Bible study, and works with the community youth and Prayer Shawl makers.