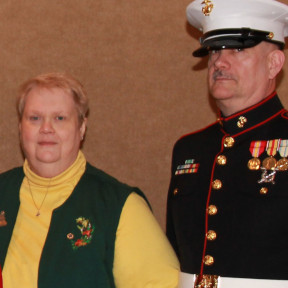 DG Terry and Lion Bill became Lions in 2003, after having been the recipients of Lions unquestioning dedication and service. As members of WV29L, DG Terry served a a Committee Chair, President and Zone Chair. Upon transferring membership to the Mingo Junction Lions in 2011, Terry has served as Club Trustee for several years and Zone Chair, as well as serving on the Constitution and Bylaws Committee.

DG Terry is the recipient of an International Presidents Medal of Excellence, an International Presidents Leadership Medal, several Presidential Certifi cates of Excellence and a Council of Governor’s Award of Merit. She has received her Bachelor’s Degree from Lions University and is working towards her Masters. She has attended RLLI level one and is working on becoming a Guiding Lion. Professionally, DG Terry has a Masters Degree in Music and Education. She taught school and private vocal and piano lessons for 32 years, as well as being a Church musician for 30 of those years. She also served as a Junior Achievement advisor and a Coordinator of Foreign Exchange students. Terry and Bill have hosted four exchange students and are still in contact with them.

DG Terry and Lion Bill have been married for 41 years and have one son, Clinton. As of November 1, 2020, the family moved from West Virginia to Ohio and are now, officially "Buckeyes".