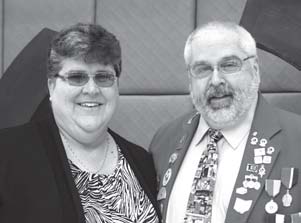 Mike Kerek joined Lions in 1999 into the Columbus Southeast Lions Club. He served in numerous officer positions, including two terms as president, before transferring to Reynoldsburg Lions in 2012. Since that time, he has served as an officer each year, including secretary for one year and president for two years. He has been the Leos advisor the last four years.

On the district level, Mike has served as a Zone Chair, Region Chair, CST, Communications/IT Chair, OH5 GLT Coordinator, 2nd Vice District Governor both for 13-F and OH-5, 1st VDG, and District Governor for the 2018-19 year.

He was the chair of the Regional Lions Leadership Institute (RLLI) Ohio Lions Legacy project, STEPS, Lions Walks for Pediatric Cancer, during its development, and is a OH5 co-coordinator for the district event. He is also part of the state Childhood Cancer Foundation development team.

He has received three Council of Governors Awards of Merit, an International Certificate of Appreciation, an International Leadership Award, an International Presidential Award, and is a Melvin Jones Fellow. Lion Mike has brought in 19 new Lions into the organization, earning the Senior Builder’s Key. He is a certified Guiding Lion.

Lion Mike is active in service to others outside of Lions as well. He served on the Pilot Dogs board from 2011-2018. He is a member of his church choir and is a worship leader. He coordinated the Free Store for six years at his previous place of employment, which helped an estimated 10,000 people over that period; made three trips to West Virginia, taking donations down by the trailer load to flood victims in several hard-hit areas; and continues to gather coats and other winter apparel for the homeless each winter. He is also a certified member of the Franklin County Community Emergency Response Team.