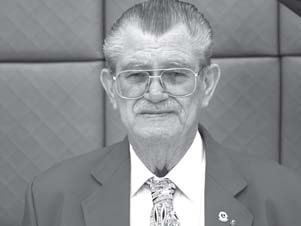 DG Tommy was born in Prince, Utah in 1940 and moved to California in 1955 where he attended Huntington Park High School. Lion Tommy served 3 years in the United States Marine Corp. Retired from Warner Brothers Studio after 37 years in the Security Department.

Lion PDG Tommy joined the Bell Lions Club in 1978 and served twice as president and as president of Downey Lions as well as treasurer for both clubs. Lion Tommy has served as zone chairman and region chairman and many district committees and MD4 committees. PDG Tommy was District Governor for 4L2 in 1991-1992. He started two Leo Clubs, was Guiding Lion for the Lynwood Lions. He has attended five USA/Canada forums, many district, state and international conventions in California and Ohio.

Lion PDG Tommy was married twice and both wives have passed away. He has two sons and one daughter-in-law, one daughter and son-in-law and one grandson.