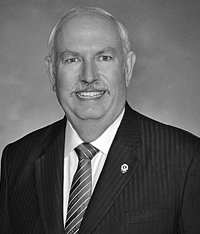 Chancellor Bob Corlew, from Milton, Tennessee, USA, was elected to serve as president of Lions Clubs International at the association’s 99th International Convention held in Fukuoka, Japan, June 24 through 28, 2016.

President Corlew is retired as chancellor for the State of Tennessee and a professor of law.

A member of the Murfreesboro Noon Lions Club since 1978, he has held many offices within the association, including charter club president, zone chairperson, district governor, cabinet secretary and council chairperson. He has been instrumental in the chartering of a number of new clubs. Most recently, he worked to charter a new club comprised of lawyers and judges, which gained more than 75 members during its first year.

In recognition of his service to the association, he has received numerous awards, including the Leadership Award, the Builder Key Award, three International President’s Awards and the Ambassador of Good Will Award, the highest honor the association bestows upon its members. He is also a Vanguard of the Melvin Jones Memorial, a Progressive Lindsey-Jennings Fellow and a Progressive Melvin Jones Fellow.

In addition to his Lions activities, President Corlew has been active in the Boy Scouts of America, the Jaycees and the American Red Cross. He has also served as a councilman in Milton and was a Major in the U.S. Army Reserve.

President Corlew and his wife, Dianne, also a Lion and a Progressive Melvin Jones Fellow, have five children and five grandchildren.